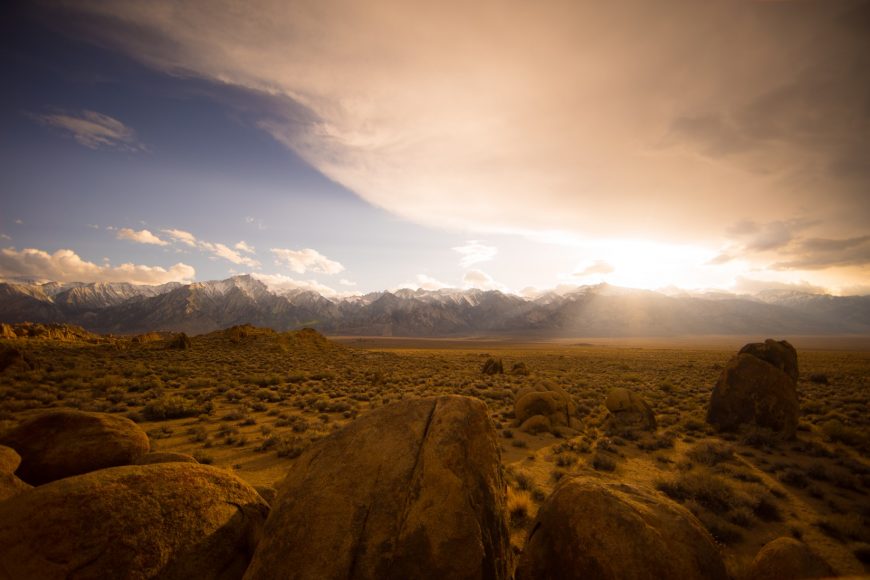 Rainfall penetrated my skin, each droplet like a myriad of daggers. Death teased as a sudden gust of wind, the misty blades of the storm, reminding me I was still alive as they shredded through my remaining grit. I bottled my emotions behind the derisive stares of the enemy. They watched as I knelt, bracers and sleeves stained with the blood of my slain brother. But what could I expect? We had fought endlessly, the two of us, against an entire army.

My brother and I swore an oath to protect our nation from hegemony, our promise crumbling as brutes swarmed my brother like locusts. Countless stab wounds riddled his body into a hemorrhaging beehive. The worst part: They ignored me, as carcasses of their lifeless allies surrounded me, many by my hand alone.

I leered at a lingering warrior wielding a battle-axe, tracking slowly and dancing in the rain under dangling chainmail. There was something uncanny about the man. He challenged me alone, a straggler from the group of retreating allies, and their deceased ones. Perhaps I killed his friend? His brother? Father? I didn’t care. Those men killed my brother, and I wanted to take the secluded man’s head for it.

“Why we are leaving you alive is surprising to me,” the warrior taunted.

“Same,” I replied, tightly gripping the hilt of my sword.

I exhaled naturally. “You all plotted to kill him, didn’t you?”

“Sure,” he responded after chuckling and twiddling with his battle-axe. “She wanted him dead, to prove something. You? Well, our sources didn’t mention another soldier of Skyegarden.”

I bellowed as the steel of my sword rang against its scabbard. The man charged, much like a stampeding beast, splashes of blood and rain only amplifying his intimidation. The first parry incited an unpromising chime; the second dropped me to a knee on the jagged terrain. Grunting at another swing, the warrior displayed his forcefulness, cleaving earthward. He seemed callous of what was crushed under his brute force, both the world and him against me.

Sunlight began to creep through crevices of an overwhelming cast, reflecting a bleeding purple onto the battlefield. I snarled, trying to eschew death. I wasn’t going to die by some unsophisticated and rebellious combatant with a fetish for bloodshed.

The field spun, and I never quite understood why the concept of death came with nausea or hot flashes, or even an urge to flee under a million ruminations. The eyes of the challenging battalion formed a coliseum, and the one-on-one match between the warrior and me seemed like the first of many. Like the enemy intended to toy with their final meal, subverting me to a combat experiment, to see whom of the incompetent pack could add a victory under his belt.

The warrior attacked again, but I managed to agilely sweep up, kicking out my foot to knock him under me. That time I held my blade many inches deep into his chest.

“Lucky,” I spilled, breathing onto my constricted fists. I awaited my second opponent, or the few hundred of them. They planned to leave me with a dead brother and my reflections, to drain me of stamina and mock my drive to avenge him. It pissed me off. “No! Hurry it up! Kill me!”

Silence. The men who attacked me acted like savages, but they ambushed in an intricate manner. They were all garbed differently too. Some fought with unique martial styles, others seemed artless. It almost felt like their tactics were deliberated to the smallest detail, a melting pot of soldiers arranged to achieve a common goal of killing my brother, only to hover around his dead body. I had to stop thinking the issue at hand pertained to me. They didn’t even expect me to be there. But, what were they waiting for?

The hundreds of glaring eyes started to fade as the environment produced an eerie coolness, welcoming a faint fog. The change in weather appeared synthetic by its spontaneity and malodor, much like it was forced.

Loud applause echoed, piercing the haze and speckling glares. It conquered my ears, like a countdown to my demise, starting from five.

“The Prodigy of the North, The One Man Army of Skyegarden, he has fallen! A fairy tale, wasted.” I searched up and down for the woman who spoke in a robotic tone. “However, such profound stories never mention that of a resembling comrade…”

“And, you don’t know?” the woman asked sincerely. “Such yokels with your swords and lore. Prophecies. Mythological bullshit. I will put you down as easily as the rest of them. Men, prepare the Gigantomechian!”

The Gigantomechian emerged quickly, out of nowhere, forming a shadow rising larger in the heart of the fog bank only to spear it with an abnormal disposition. It moved not only on wheels, but also the remains of its previous prey, controlled by peons of an unknown land. My eyes never left it, a mountainous gray weapon of looming pain and obliteration.

The idea of nuclear termination left me feeling more ill behind the sounds of steam and metallic collisions. The woman had already planned to unleash an attack from a canon holstered at the peak of the machine. I stared into the crux of a burgeoning sphere of atomic energy, its effervescent crimson mirroring the taints of massacres among humans—the canvas of a warzone.

“Relish in its beauty!” She shouted.

“Reveal yourself!” I yelled, having nothing else to say, distracted by the grandeur of the mechanical weapon.

The nuclear sphere stopped growing, idling as a small star in the tank of the canon. The Gigantomechian joined the others, and in silence they all faced my body and the corpse of my brother.

I couldn’t take the scrutiny any longer. “I don’t know what you’re doing, nor have I seen another nation manufacture such fancy machinery, but please just kill me…”

“We’re not from around these parts,” the woman informed. “I assure you, though, we’re the good guys. Set to eliminate all evil plaguing this world, we strive to purify and reform, lending advancements to neighboring factions and nations that elect to help. It’s no coincidence your brother was led here.”

My sword left my hand. “Skyegarden betrayed us? We’ve been nothing but loyal! We’ve lived there our entire lives!”

“Nothing about your brother is indigenous to these lands, boy.”

“Who are you to tell me where we’re from!”

Suddenly, my tenacity broke as my brother showed signs of life. He dug his nails into the dirt, gasping for air in an already desiccated land.

His face welcomed me with a petrifying gaze. Chills touched all ends of my soul, the kind not causing a shiver, but more of a brief paralysis. At each blink his eyes grew darker, like someone dripping ink into a chalice of water. The obsidian orbs eventually took interest in me.

Above mutating skin, my brother’s flesh was conquered by a pestilential darkness—a charring of his skin. Worse, his body cried off a fiendish presence. It felt surreal. I had no time to process what to fear more: the Gigantomechian or the wicked resurgence of my brother.

The woman spoke brasher, “The man born under the heavenly showers represented forthcoming harmony for his people. Is it striking to learn he’s a monster? He who protected Skyegarden for decades slaughtered millions in the process, and he accomplished this alone. Have you never questioned his unprecedented reign?”

“I’m here today! Today…he requested that I fight alongside him. He said it was his time to stop shouldering the pains of his people…” My eyes glued onto my brother’s trembling body. “He loved them…everyone of Skyegarden.” The woman probably didn’t listen to me.

My brows furrowed after reciting my brother’s words. I wondered if he knew of the collusion. The woman’s question resonated with me in a different light. She was right about one thing: I had never speculated how my brother received the title of The One Man Army.

Analyzing my brother again led me to slowly pick up my sword. My brother was the type of man who fought our enemies without hesitation. A man who slayed evil on impulse. Evil, at least to us, but the woman claimed we were the sinister ones.

For some reason, I couldn’t let go of my blade. I projected evil onto my brother, the idea never coming to mind until that day. Then, the Gigantomechian resumed its production, the nuclear sphere growing larger and brighter.

Facing a binary of suns, I lingered, trying to imagine more favorable ways to die. I conceded, leaning with my palm pressed into my sword’s pommel. Shaking alike my brother, I fronted numb quivers as patches of warmth flowed through my veins, nearly comforting and inconsistent with my inability to defend myself.

The sedative feeling mimicked the fear and recognition of an absolute death. No random chance at play, no lucky decisive parry or dodge of a blade, no older brother to save all of Skyegarden. Fighting the Gigantomechian was no fair battle. If I were able to pick: I’d rather the warrior with the battle-axe decapitate me than to foresee an atomic globe disintegrate my body to the nearest cell. Soldiers seldom chose how they die, but those who long for the quick and painless usually end up suffering the most brazen and grim.

So, I closed my eyes and allowed the calming sensation to take over.

And the woman yelled, “Fire!”*

I woke up to complete desolation, aside my lifeless brother. Holding him, I cringed at every reaction to keep his head from tilting away.

A sense of contentment dawned on me, the setting providing the perfect complement. The sun had ascended to its highest point, shining directly on the empty field, nobody to be seen for miles. I assumed the Gigantomechian annihilated everything. Questions of my survival didn’t matter at the time, and what did preceded all priorities: My brother gave birth to a smile before his passing. I almost didn’t recognize him.

I placed my hand on his cheek, and then despair shattered the ephemeral merriment, enough to vindicate cries of distress. I wanted to spin, but I felt okay, rather rejuvenated and full of vigor. The contrast caused my body to act on its own, using all of my newfound energy to express my misery. Terrorizing screams escaped my lungs as I watched blemishes of fiendish blight slowly vanish from my own hand.

This story was originally featured in Aphotic Realm. 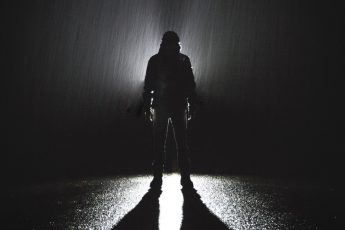 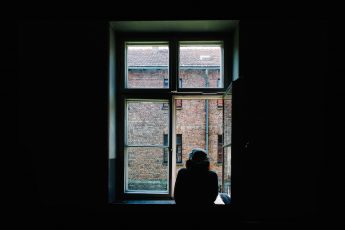